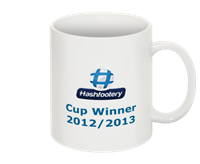 As is traditional, we are running a knockout tournament based on your hashfootery predictions - our very own FA Cup, if you like. The knockout tournament uses your scoring from our main competition, so you don't need to do anything extra to take part. Just playing hashfootery (at least twice) in August, September, October makes you eligible to be included in the Hashfootery Cup draw.

The winner of each head-to-head pairing will be decided on points scored over a calendar month and will progress to the next round.

The winner will receive an impressively unique trophy, like the one pictured right, only a bit different to make it unique.