27 Feb 2013 - a good suggestion has been presented, namely to have a doubles knockout tournament, i.e. players would pair up and the sum of their prediction scores would compete against that of an opponent pair for a calendar month. We can try this new format out over March, April and May with the first 8 pairings to come forward, with a view to running a full doubles tournament next season over six months (up to 32 pairings). 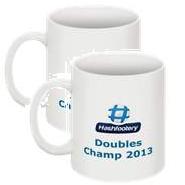 Eight pairings were entered into the trial doubles tournament on a first-come-first-served basis. The draw for the doubles quarter-finals to be played over March 2013 was broadcast live on Friday 1 March 2013 at 8pm GMT or thereabouts on http://justin.tv/hashfootery, after which we were immediately banned for some reason.